Even though their hearts were tied, like golden chains, they still could not remain together and the handsome and intimidating scientist disappeared forever.

Under the beautiful oak tree at the romantic Mertona square, where the gushing waters are not enough to water the trees of Mertona, there was an old and tired from life man with a cane. He started narrating to me a true love story that had unfolded almost 100 years ago…

As he started narrating, I sat silently next to him, as my curiosity about this love story was pinned on his every word. He asked me if I had ever read an article published in the newspapers, “Atlantida” and “Ethniko’s Kyrikas”, around 1940, the story about a doctor whose name was Dr. Dimitrios Zanakis. I replied to him that at that time I was just a high-school student on Karpathos and probably didn’t read newspapers. He looked at me and asked “So, you have never heard of this story?” “No!” I exclaimed with my curiosity being even more provoked at this point.

Once I arrived back to the town of Aperi I started asking the elderly women and men if they knew anything about this story. The information-hopefully true- started trickling in and this story is given to you the readers in memory of this immortal love story, wherever their souls might be.

But let us take a step back in time. In the year 1896, Michael D. Zanakis, who was appointed from the “Omonoia” organization of America representative to look after the construction of our schools in Aperi, married Ernia daughter of Nikiti. From this marriage, nine children were born whose all 9 names, unfortunately I could not find.

Their first child was named Dimitrios Michael Zanakis. Another child of theirs was named Anna who passed away at the age of 13. The last child was named Andreas who was born the same day as Nikolaos Anastasiou Alexiades in the year 1892. Many elderly Aperitians remember that day, because the midwife of the town left the Zanakis’s home to deliver another baby who was named Nikolas Alexiades.

Unfortunately, from the nine children born in the Zanakis family only one child survived: Dimitrios Michael Zanakis. He was endowed with good looks and proven intelligence. After attending the schools of Aperi he then attended the Pythagorean High-school on the island of Samos. After graduating from high-school he was accepted into the Athens University School of Medicine. Once he completed Medical school he continued his medical training in Paris, France for another two years.

Although everything in Dimitri Michael Zanakis’ life, from his looks to his intelligence, seemed to be a sign of a beautiful future, fate had a different sad, bitter story written out for him. And so here the rest of the story goes…

One day Zanakis saw Kyrania Fragkiskou Sakellaridis. The attraction from both sides was instant. They fell deeply in love and had only one desire: to be united forever. Zanakis was still a student in Athens. Zanakis father, noticed that another man had arrived in town, who was also interested in Kyrania.

Deciding to protect his son’s feelings and desire to marry Kyrania, he arranged to meet with Kyrania’s father, and persuade him to agree to an engagement between Dimitri and Kyrania. And so, it was done. Even though Kyrania and Dimitri were considered engaged, fate had something else in mind…

A man, who was a doctor, who had heard the engagement of Kyrania and Dimitri was not that pleased. He wanted his son to marry Kyrania. He had a plan. He and another person decided to secretly dress as women and in the middle of the night, went to Zanakis home.

They climbed the court wall and knocked on old Zanakis’ door, who after a few minutes opened the door. The doctor revealed who he was and told Zanakis that he wants his son to break his engagement with Kyrania, and to become engaged with his daughter who had a huge dowry and who was an only child. Old Zanakis was stunned but skeptical…He told the man “my son is still a student…if you can meet with him and persuade him, then maybe…”

Indeed, the trip to Zanakis son happened and the pressure from parents and this man was so strong that young Zanakis gave in. The engagement with Kyrania was now off. New engagements, with the daughter of the doctor were announced. The engagement lasted a total of seven years.

The young Zanakis excuse for not getting married was that he wanted to complete his studies and depend on his own financial strength in order to get married. He wanted to be independent. He completed medical school on time and was promised by his new father in law, to send him to Paris for further studies. Some say, that his parents signed a contract with his new father in law as far as the expenses of his further studies in Paris, while others say that such an agreement was never signed.

After two years Dimitris completes his graduate studies in Paris.

Everything seemed to be leading to marriage with his now fiancé. The kerchiefs and aprons which are part of the tradition in a Karpathian wedding still exist today and even have the initials DZ- Dimitrios Zanakis. Yes, they still exist…but never were part of a wedding planned.

He breaks the engagement that his parents forced him into.

Dimitris asks money from his uncle Georgios Nikitiadi and immediately travels to Aidini, Asia Minor and from there to Cairo, Egypt and finally to India. Proof of this long trip are the three letters dated 13th of April 1906 from Calcutta, India, 16th of May 1906, from Allachambath, where he stayed at the United Provinces Hotel. There are also two other letters concerning Dimitris pain: 17th of May 1903 and October 1st, 1904. The author of this article has seen and has read the above letters. They exist.

All letters were directed to his mother. Dimitris last proof of existence was from his last letter from Calcutta.

Many people tried to find out where he was, even if he was alive. The father of Fotini Elias Makris, named Andrew Chatzigiorgis Chiotakis, who lived on the island of Rhodes, was informed by a French archeologist that there was a Karpathian doctor, who lived in Versailles who became the mayor of this city, requesting, that if he is Dimitrios Zanakis, to come in contact with him immediately. He explained in his letter how devastated his parents were. Mr. Chiotakis never received a reply to his letter and neither had any of his relatives received any replies to their letters. None of his relative’s efforts to discover where Dimitris was, ever had any results… When the cousin of Dimitris mother, Emmanuel Sakellis, was found after missing for 24 years, everyone had hopes that Dimitris would also be alive and found. His mother latched onto this hope and wrote a letter with rhyming sad couplets to Emmanuel Sakellis expressing her pain but also hope that her son would also be found:

your father died with bitterness on his lips drawn

My pain, from you, less it seems to be in my heart

hope to God my son will be found and never part

check to see if it is Dimitris and swear in honor

My tears have covered the light of my eyes

and nothing is good even if it is paradise

For me the sun rays are more than dark

months and years and days I continuously mark

I hope and believe that find him you can

because you are travelled, smart and have a plan

Nothing happens, no information returned by anyone and Dimitri’s parents were withering away from pain. But the story continues… Before Dimitri’s father died, Dimitris sent an open letter to his parents. The person who picked the letter up, read it, and in order to prevent a family tragedy did not deliver it to Dimitris parents. The letter stated, that ” just the way you pierced with a sword my heart, I am now piercing yours. That night one of the most beautiful children of Bolada received a deadly hit…”

I have not seen or red this letter, while investigating this story.

Dimitri’s father passes away in 1935, the day that the politician Eleutherios Benizelos arrives on Karpathos. Dimitri’s mother passed away from a broken heart in 1937. The courts declare that Dimitris Michael Zanakis is lost and most likely dead and decide to divide his father’s property to his nephews Dimitrios Zanakis (same name as the lost Dimitri) and to Stasa. His mother’s property, Ernias tou Nikiti, was given to Anna Nikitiadi.

Unfortunately, the parents’ desire for wealth destroyed what was indeed true love. All chains of love were broken and the result was the disappearance and loss of one of Aperi’s brightest youth: Dimitrios Michael Zanakis.

From the letter, and from the information I had found about this story, it can be concluded that the reasons Zanakis refused to return back are the following:

2. His love of his first fiancée.

4. His relationship with his parents.

Both fiancées of Dimitri later on married doctors.

Many have described to me that his first fiancée, Kyrania Fr. Sakellaridi, was extremely attractive and beautiful. During the day of her wedding a couplet was sung praising her beauty:

A crown, a throne and golden carriage is needed

to stroll, to be seen and like a queen greeted.

Nothing was ever heard again about Dimitri Zanaki. It is said that his relatives found his grave in India. I have not seen any pictures of his grave or any documentation so far stating where Dimitris is buried.

Gently in his memory, imaginatively, I place flowers on his grave, wherever it exists… 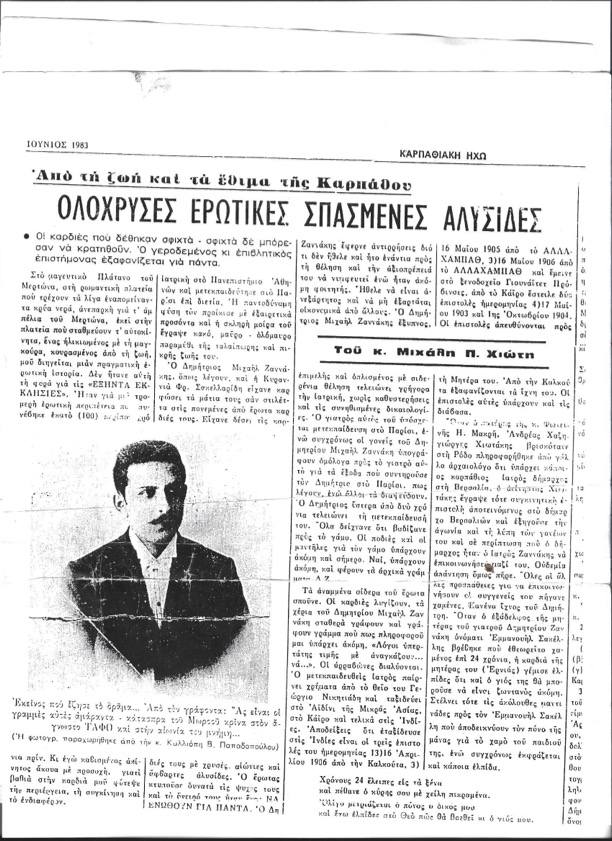 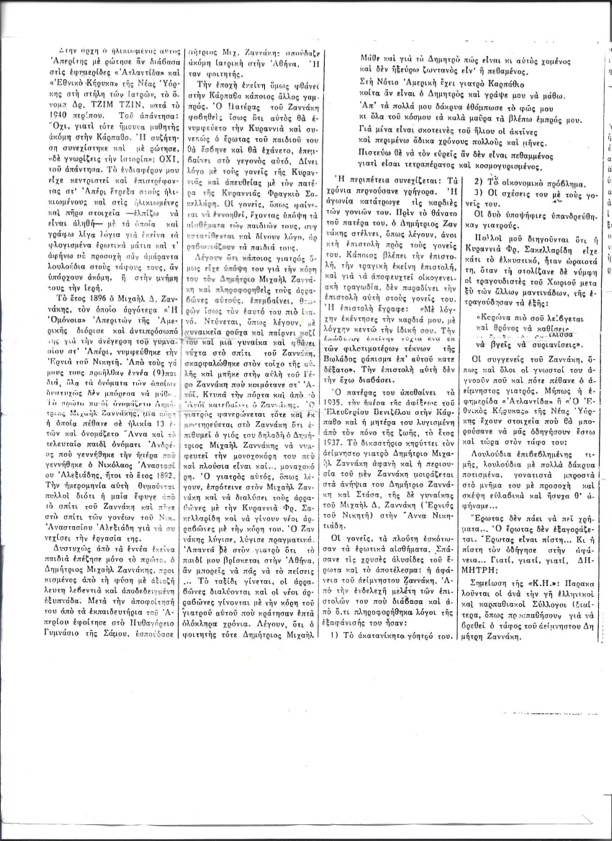 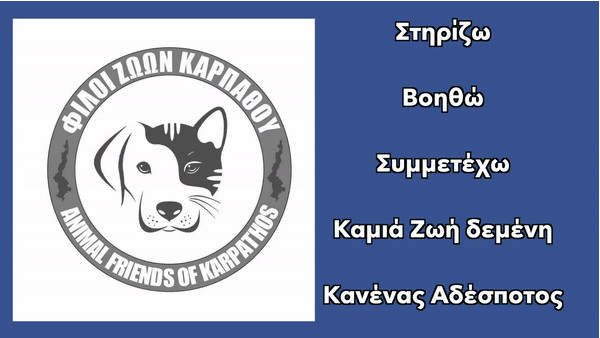